Ochre XL Restaurant Remodel – Before, During and After

Tucked in an outer suburb of the greater Boston metroplex is Plaistow, NH, just over the border from Massachusetts. If you’ve ever spent time in this part of the New Hampshire you know its populated with people that like to have fun! Whether that’s snowmobiling and skiing in the winter or riding motorcycles and boating in the summer, a good place to unwind after a long day of activity, even if its just for a drink on the way home from the office, is the Crow’s Nest Pub & Grill. We had the privilege of working with the Crow’s Nest team starting last year on a dramatic renovation of the restaurant. They were looking to update the exterior of the building to add significant curb appeal and a stacked stone wainscoat was an important part of the new overall look. As you can see below, the old building had a worn out exterior and barn style roof that needed replacing.

The Crow’s Nest team decided on our Ochre XL Series Stacked Stone Panels as the material selection for the exterior wainscoat as well as some interior features as well. Stacked Stone is a great selection for a wainscoat application as it’s an incredibly durable building material. The old exterior facade had a brick wainscoat, so the stacked stone selection really classed up the exterior look of the building. The durability is especially important since the stone will stand up to snow and salt, as well as people and deliveries accidentally bumping into it. 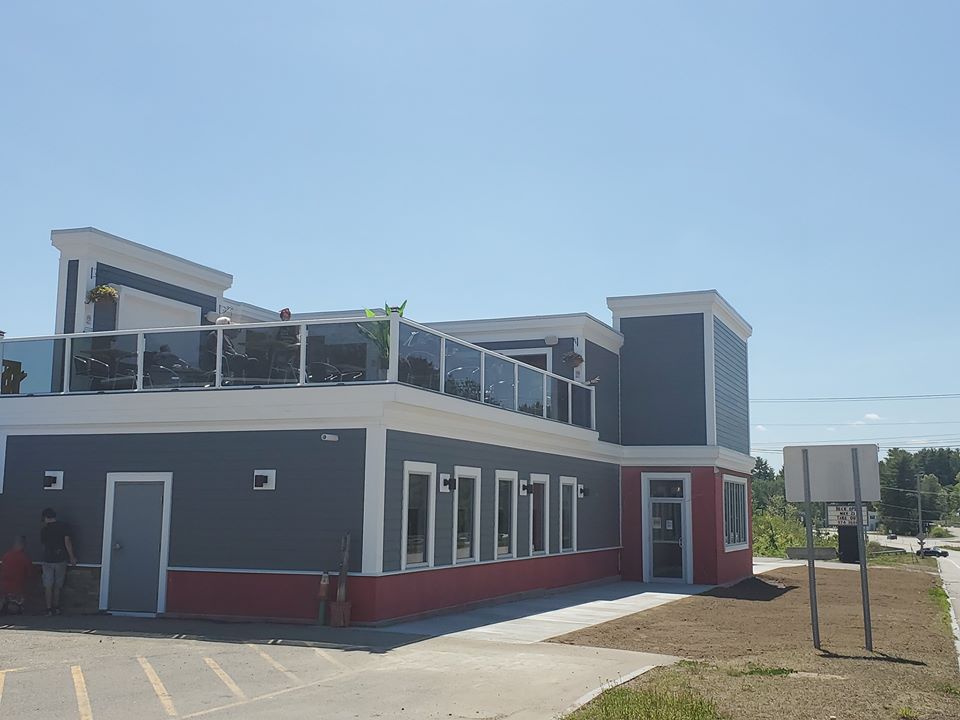 This in process photo shows the dramatic transformation to the building. Gone is the old roof and in its place a newly minted second floor including a beautiful outdoor terrace. The old white lap siding has been replaced with cement board siding painted in a very typical New England or Cape Cod blue color with bright white trim on the corners and eaves. In this photo the wainscoat section has been prepared with a waterproofing membrane. The waterproofing membrane is an important layer for a successful stacked stone installation because it prevents water from penetrating into the wall cavity where it can cause lots of issues. Most waterproofing membranes also have elastomeric properties which allow products like tile and stone veneer to be used in freeze / thaw conditions as they help the tile / stone adjust to the movements in the substrate caused by expansion and contraction.

The finished exterior looks amazing on its own right, and especially so when you compare it to what it looked like just a few months earlier. The stone wraps all the way around the building at waist level and then covers the entire first floor at the main entrance. The color pallete that was pulled together here looks fantastic with the brown and grey base tones and rust colored accents of the Ochre XL Series Stacked Stone Panels creating a subtle contrast with the traditional blue siding and white trim. The building looks updated and fresh and ready to take on the next 20 or 30 years of patrons.

We hoped you enjoyed this before, during and after photo series of the Crow’s Nest Pub & Grill in Plaistow, NH. Seeing before and after photos is one of the most rewarding parts of working with natural stone veneer products because they really can produce big changes in the look and feel of a space, commercial or residential, big or small. Norstone has been making architectural and commercial grade natural stone veneer products for the US market for for more than 15 years. Contact us today to learn more about any of natural stone products, ranging from rough hewn splitface to modern honed and polished stone for your next stone project.